What’s the Rule of 72 in Investing? 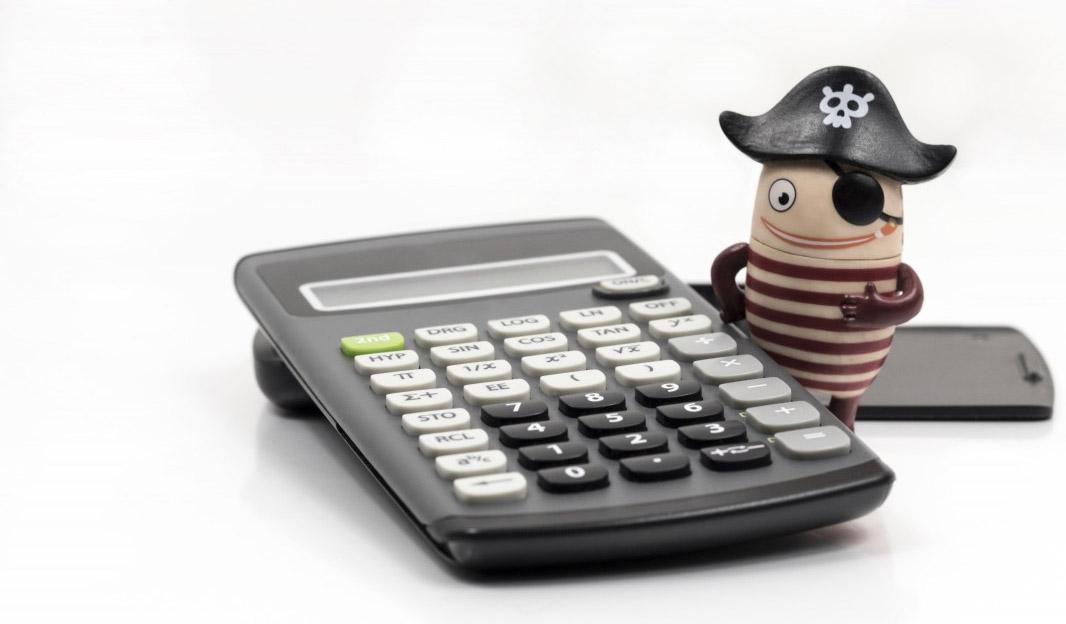 Compounding returns are critical to building wealth. For example, if you invested $250 a month in a mutual fund earning the average historical stock market return (around 10.5%), you’d be a millionaire in under 36 years.

But not all of us sit around all day playing with compound interest calculators. It helps to have a shorthand rule of thumb sometimes.

To calculate how long it will take an investment to double, you can just divide 72 by the return you expect to earn.

Not exactly advanced calculus, is it?

The Rule of 72 isn’t precisely accurate. But for back-of-the-napkin calculations, it’s very close — at least for common returns ranging from 6-10%. More on variations of the Rule of 72 in investing later.

Formula for the Rule of 72

The formula for the Rule of 72 is pretty simple:

Years to double = 72 / rate of return on investment (ROI)

As another example, if you expect to earn 8% on an investment each year, then it would take 9 years for your initial investment to double: 9 = 72 / 8.

You don’t have to use whole numbers, either. If you invest in real estate crowdfunding platform Streitwise, which pays an 8.4% annual dividend yield, you could expect to double your money in 8.6 years (8.6 = 72 / 8.4).

Also bear in mind that the Rule of 72 in finance doesn’t take additional contributions into account. It only calculates the time period for a one-time initial investment to double if the returns are reinvested.

Finally, the Rule of 72 assumes that the return compounds annually. For investments that compound monthly,quarterly, or semiannually, it’s less accurate.

Uses of the Rule of 72 in Investing

As noted above, you can use the Rule of 72 to figure out how long it will take an investment to double.

That’s especially useful if you’re thinking about CoastFI. For non-FIRE nerds (FIRE: financial independence, retire early), CoastFI refers to building up a nest egg quickly, then not investing another cent until you’re ready to retire. (Read more about the steps to financial freedom here.)

So for example, you might save up $500,000 in a sprint, then stop saving, secure in the knowledge that your investments will compound over time and deliver a juicy enough nest egg by the time you want to retire. The Rule of 72 suggests that your $500,000 will double to $1 million in 7.2 years if you’re earning a 10% return. You could retire then if you’re happy with that nest egg, or leave it for another 7.2 years to double again to $2 million. Leave it for another 7.2 years, and you’d have $4 million.

That exponential growth shows the power of compound interest.

You can also use the Rule of 72 in investing to determine the annual rate of return you’d need for your investment to double within your target time frame. So, you tweak the formula to divide 72 by the number of years you want your money to double in.

Limitations of the Rule of 72

The Rule of 72 is a shorthand quick calculation, not the exact formula. The true formula for how long it takes an investment to double is:

“T” is the time it takes the investment to double, “ln” stands for natural log function, and “r” is the compounded rate of return. Dust off your scientific calculator and high school math for that one. Still, the Rule of 72 in finance is pretty accurate, especially for rates of return between 6-10%. Here’s a breakdown courtesy of the Corporate Finance Institute: 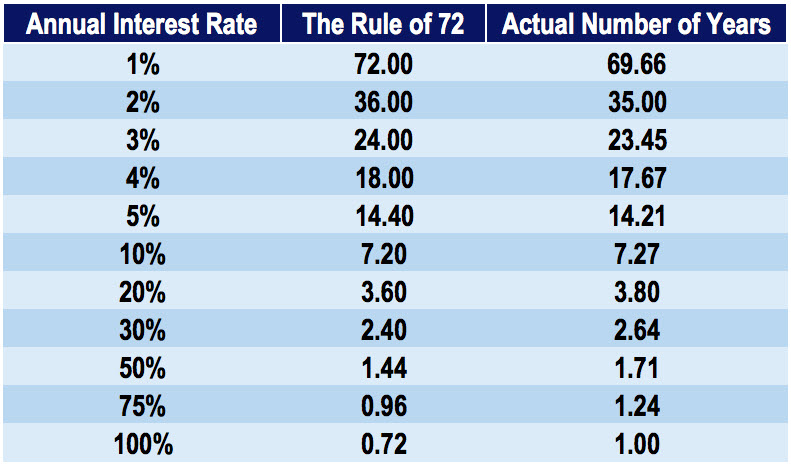 At interest rates of 1-2%, the calculation is off by a year or more. But for returns between 3-6% or above 10%, it’s only off by a few months. If you want a more precise calculation without having to break out your high school logarithmic math, try a few variations on the Rule of 72.

Variations on the Rule of 72

For a more accurate calculation that you can still do on a cocktail napkin after throwing back a few, you can tweak 72 as your base number. Set 8% as your standard rate of return, and for every 3 percentage points above or below 8%, add or subtract 1 from 72. For example, if you find a rental property that earns 11% cash-on-cash returns (3 points higher than 8%), use 73 instead of 72 in the formula: 73 / 11 = 6.64 years to double. Alternatively, if you expect to earn 5% on an investment, drop the base number to 71, so the formula reads: 71 / 5 = 14.2 years. At a 2% annual interest rate, use 70 as your base (“Rule of 70”). At low return rates under 2%, use 69.3 as your base number. Investors sometimes refer to this as the Rule of 69.3 or Rule of 69 if you want to round down for a more simple calculation. Here’s a further chart showing how variations stack up to the Rule of 72 and the real numbers:

Lastly, remember that the real period of time to double your current balance with daily compounding or continuous compounding strays further from the Rule of 72 results, which was designed to estimate annual compounding.

The Rule of 72 was first published in 1494 by Luca Pacioli. His textbook, “Summa de Arithmetica,” earned him the title “Father of Accounting” and was used for centuries to teach the discipline. So, you’re in pretty good hands using it to run rough numbers for how long your investment will take to double. Besides, stock and real estate returns aren’t 100% predictable. The variation in returns from year to year is enough to throw off the calculation more than the Rule of 72’s discrepancies. Long-term average rates of return are all well and good, but in the real world annual returns bounce all over the place and tweak your timeframe. The important thing is to just start investing, and put your dollars to work for you rather than vice versa.♦   How do you come up with your own rough estimates for how long it will take to reach your financial goals?

How Many Rental Properties Does It Take to Retire Early? 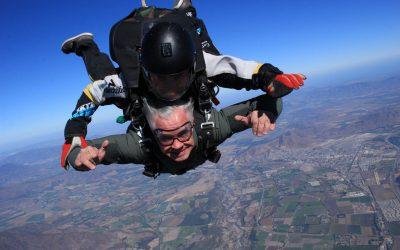 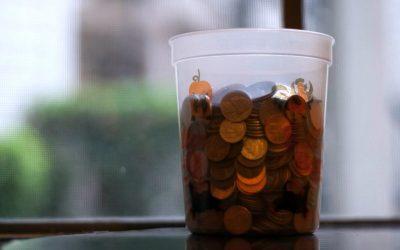